“Disturb the electrical equilibrium in the nearby portions of the earth…to bring into operation in anyway some instruments.”
This is the well-known statement by Nicolas Tesla regarding wireless transmission of electric power. The objective of his experiments was simply to produce effects locally and detect them at a distance. Although his experiments ended in a failure, his theories became the basis of Wireless Power Transmission (WPT).
Wireless Power Transmission (WPT) is a point-to-point power transmission (non-broadcast uses) or to be more precise, concentrating power to receiver/antenna. This method increases the power transmission efficiency and is brought close to 100% (using taper method). All type of electromagnetic waves can be used for WPT, but Microwaves are preferred since they are more easily focused into narrow beams than radio waves, allowing frequency reuse; their comparatively higher frequencies allow broad bandwidth and high data transmission rates, and antenna sizes are smaller than at lower frequencies because antenna size is inversely proportional to transmitted frequency. So WPT is also known as Microwave Power Transmission (MPT).
Future suitable and largest application of WPT via microwave is a Space Solar Power Satellite (SPS). The SPS is a gigantic satellite designed as an electric power plant orbiting the geostationary earth orbit. It consists of mainly three segments; solar energy collector to convert the solar energy into DC, DC to microwave converter and large antenna to beam down the microwave power to the ground. The first solar collector can be either a Photovoltaic array or solar thermal turbine. The second DC to Microwave converter of the SPS can be either microwave tube system and/or semiconductor system. The third system is a gigantic antenna array.
– Antenna: All type of antenna can be used for WPT/MPT system such as horn antenna, parabolic antenna, phase array antennas or any other type of antennas. However in SPS, phase array antennas are used as microwaves have to be controlled i.e., microwaves have to be directed accurately and speedily. The Phase Array is a directive antenna which generates a beam form whose shape and direction by the relative phases and amplitude of the waves at the individual antenna elements. Thus it is possible to steer the direction and also to control the speed of the microwave using this phase array antenna.
– Converter/ Generator: High efficient generator is used for WPT/MPT system to generate and amplify the captured solar energy into microwave. The two types of generator used are microwave tube system and semiconductor system. However in SPS, microwave tube system is used because of its lightness (easy to launch) and higher efficiency (reduce heat problems). And also these microwave tube can generate and amplify higher power microwave than that by the semiconductor amplifier. 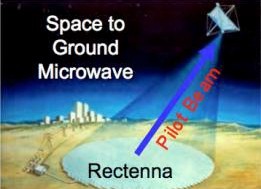 Stay connected with us in your favorite flavor!

Back to the top