Getting Started with Image Processing in Matlab

Getting Started with Image Processing in Matlab

Most of the images can be divided into 3 broad categories:
For a detailed discussion of various types of images, you may please refer to my previous post: Image processing: Types of images.

For almost all image processing tasks, the first step would be ofcourse to read the image. Then we may view it. Next, we would process the image, which include transformations or manipulations of the image (for example, rotation, zooming, filtering etc…). Then we may view the results of the processing, and finally if we are satisfied, save the processed image.
The following table gives an overview of the commands for all these.
Lets do a small hands-on:
Our aim is to read an image, flip it and save it. Open Matlab. Type the following commands in the command window:
>> img = imread(‘cameraman.tif’);
This will read the image cameraman.tif and will store the pixel details in the matrix img. Note that the image cameraman is by default in the Matlab path. That is why we have omitted the path. If you have an image ‘example.jpg’ in the path ‘C:\image’, you would have issued the command as: img = imread(‘C:\image\example.jpg’);
Now, type
>> size(img)ans =256   256
Matlab displays the answer as 256 256. This means there are 256 rows and 256 colomns in our image. That is, our image has a dimention of 256 x 256. Also, this is a 2D matrix, indicating that the image is not a color image.
Lets try to display the image. For that, type the following command at the prompt:
>> imshow(img);
Matlab should display your image in a window as shown in figure. 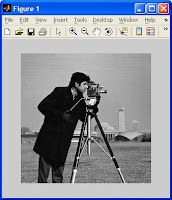 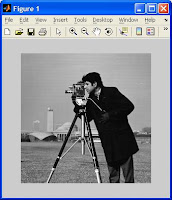 Blog copied from my own blog : http://dspforyou.blogspot.in/

Stay connected with us in your favorite flavor!

Back to the top